THE FESTIVAL BLOG HAS MOVED!

You can now find the 14/48 blog on our main website at www.the1448projects.org/blog. Follow all of the festival action, and learn about some of our other programs and projects, too.
Posted by JJisafool at 5:44 AM 1 comment:

Ready to Rock and Roll 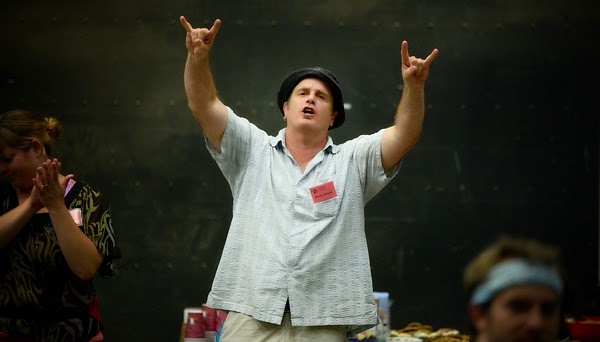 "If your energy is low or you're feeling tired, RAISE THE FUCKING STAKES!" 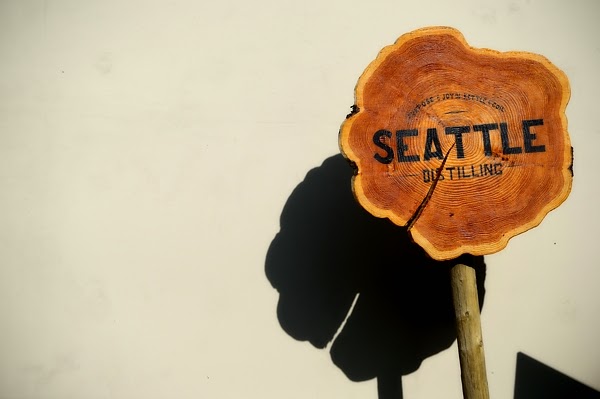 Let us put our spice on your tongue.  (You know you want it.)
Posted by Kymberlee at 5:37 PM No comments:


Now that the dust has settled and we're working on new plays for tonight's show, there's time for a recap of the shows from last night.

#1  The night started with Pamela Hobart-Carter's play, But New Thoughts Appear In Our Minds, directed by Maria Glanz.  This story of freedom and complacency was a thought-provoking way to start the evening.

#2  I kept hearing about a fish song and penises yesterday.  It all made sense (well, sort of) when I saw Scot Auguston's hilarious play, Candiru Means I Love You, directed by Peter A. Jacobs.  It all begins with the line, "You have a fish living in your willy," and ends with "Go with your superstition, it's your banana stand."  If you saw the play, you'll know whether science or "ancient wisdom" saved the day.  If you weren't here, well, I'm sorry that you don't have that ditty they were singing stuck in your head too.


#3  A couple fighting an endless, unresolvable battle and their dog that just wants to play was the topic of Olive Juice by Courtney Meaker.  Director Kathryn van Meter followed the GO BIG OR GO HOME mantra on this piece that the irresistible dog played by Brian D. Simmons going out into the audience to retrieve the ball.  Steven G. Sterne and Mik Kuhlman were convincing as a couple whose relationship seemed held together by tension.


#4  The Tukwila 500 by Bret Fetzer and Juliet Waller Pruzan was a raucous race. Director Peter Dylan O'Connor did an ace job staging the confusion of this race of the heart where, "It depends on what race you're trying to win."  All brought to life by the talented cast comprised of Patrick Allcorn, Bradford Farwell, Elicia Wickstead, Imogen Love, Emma J. Bamford. 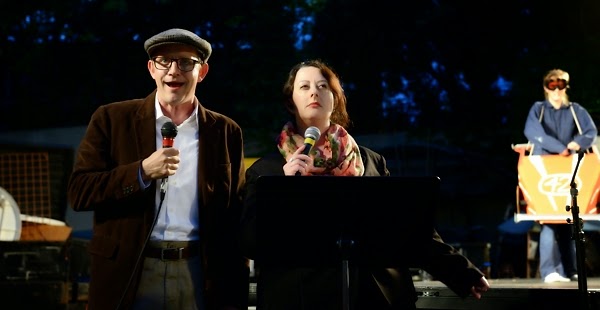 #5  Virgin playwright Jennifer Dice brought the hilarity to the top of the second act with Three Girl Pile-Up.  Directed by Beth Peterson and featuring the talents of Cody Smith, Jim Jewell (twerking), JakeYnzunza, and Joe Zavadil, this play explored the dark world of suburban pageant princesses and the fathers who manically support their girls while tearing the other girls down, because, competition.

#6 Jerry Kraft brought us Sand Script exploring the complexity of relationships when two couples end up stranded on a deserted island.  One couple, both therapists, are trying to "save" the marriage of the less educated other couple.  This play, directed by Virgin Director Jen Moon, was a fantastic exploration of classism, among other things. 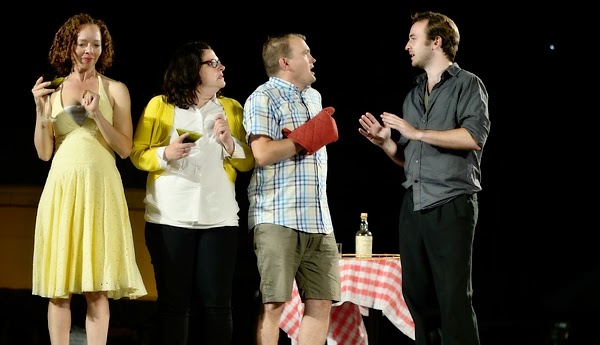 #7 Let's Talk About Monica by Becky Bruhn was a backyard BBQ thriller involving one dead suburban housewife, her journal, her ex-husband and her emotionally-repressed neighbors.  We never did find out if she was murdered by her husband but we do know who she was sleeping with.  Ace direction by Ali el-Gasseir had the cast bringing some big choices and perfect timing by cast members   Gin Hammond, Lori Lee Haener, Scott Abernethy, Andy Jensen, and Ryan Spickard.

So now you know what happened last night.  Come out and see what we've cooked up for tonight.  I've heard tell of wombs, witches and whimsy.

(Fabulous photos by Joe Iano)
Posted by Kymberlee at 5:15 PM No comments:

In the middle of the day, directors take a break from their casts and convene with the tech/design team. Each director talks through the show - noting spacing, blocking, prop and lighting elements - with the team so that potential issues can be identified and resolved in time for tech (20 minutes for each show) to run smoothly.
Tonight's festival is heavy on the technical excitement: there's some mountain climbing, breakaway glass, etc., but the most technically demanding show is the one involving the large uterus costumes.

While the directors are working, the band is tightening up (and they are killing it). 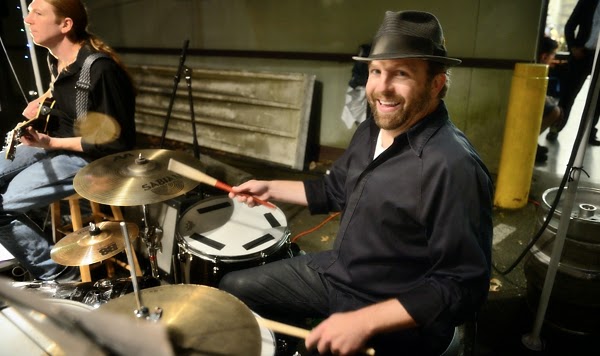 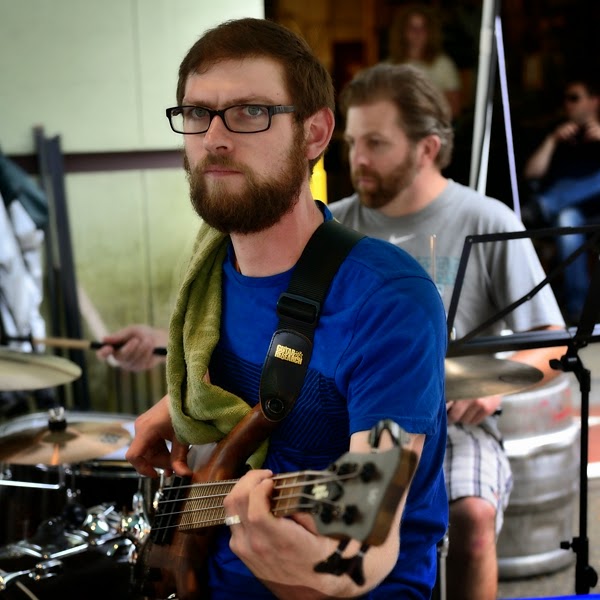 Posted by Walker at 4:10 PM No comments:

From the meeting I watched, it seems this is a demanding day for the design team - but knowing them, the results will be amazing. Here are some of the props they're fabricating:

(I'm especially excited about the uterine sacs. Maybe that's just me.)
Posted by Walker at 2:52 PM No comments:

Jerry Kraft's play, "Five Before", is a wonderful piece with which to end tonight's festival. Five people about to get pushed into an entirely different sphere of existence confront their very different feelings about what they're about to experience. I don't want to spoil the surprise - but Five Before is a thought-provoking exploration of our purpose as humans, while also featuring hilarious banter, some very exciting and distinctive costumes, and a ridiculously relevant opera pun.

Posted by Walker at 2:39 PM No comments:


If you think the band was smokin' last night, check it tonight.

I might have been heard saying that I could use a blood transfusion for energy earlier but every time I walk by the band, I get a boost.  They are taking "Trial by Fire" to a whole new level.

Posted by Kymberlee at 2:26 PM No comments:

Play 5, "Celestial Walkabout", is a poignant display of the sacrifices you'll make for your family. In 2163, a girl takes a tour of all the planets to Pluto on her 13th birthday - it's a traditional Jewish custom, her parents inform her - unaware of the real reason they've sent her on the trip.

Though it is really moving, there are definitely moments of levity (and also a huge prop spaceship). Choice quote: "We would like to present you with a beautiful Martian succulent." "Jimmy grows them in his greenhouse."
Posted by Walker at 2:17 PM No comments:

Play 4, "We Would Like to Thank 4Culture", is taking using the space to a whole new level. Unfolding in real time, the play tracks an outdoor production of Joan of Arc gone terribly wrong. As the characters' rehearsal unfolds, the chaos leads to a Christina Aguilera cover, a shower of Frisbees, a dogfight, potentially kazoos, a stylized monologue (resembling interpretive dance) performed by two men as the conflicting sides of Joan of Arc's consciousness, and more - as Imogen Love's character notes, "That's theater in the park for you!"
Choice quote from the show: "You know, Joan of Arc -" "Yes, God?" "I never asked you, what is your preferred pronoun?"

Posted by Walker at 1:53 PM No comments:

Posted by Kymberlee at 12:39 PM No comments:

I sat across from Pamela Hobart-Carter and Peter Dylan O'Connor to eat breakfast and said, "Please excuse me while I eavesdrop for potential blog quotes."

They smiled and went back to work.  I was interrupted so I didn't really hear anything juicy but a bit later, Pamela looked up and said, "Thank you, Kymberlee, I think you helped me clarify something in the play."

I said, "I'm not sure how my presence helped with that, but I'm delighted."

She said, "There's something about the awareness of an audience that makes a difference."

So there you have it.  That's why we do this.  For you, dear audience.  Come hither and see what we're making for you.
Posted by Kymberlee at 11:24 AM No comments:


The sun is (thankfully) beaming down on this weekend's second round of premiere plays - this time with the theme Trial By Fire. Seven new shows have been written and cast, and are well on their way to tonight's performance.


The Dock
by Becky Bruhn

The Office Witch
by Jennifer Dice

Directed by Peter A. Jacobs

We Would Like to Thank 4Culture
by Scot Augustson

Against My Better Judgement
by Courtney Meaker

Five Before
by Jerry Kraft

Come and Get It!

The kitchen crew is busy making everyone dinner and tech is happening.   Everything is still dry (yay!) and the Jerry Manning Beer Garden is stocked with Hilliards Beer.  Among the many curious things we've heard today:

"You're giving me the whole penis bit."

Here are some shots from the day by the fabulous Joe Iano: 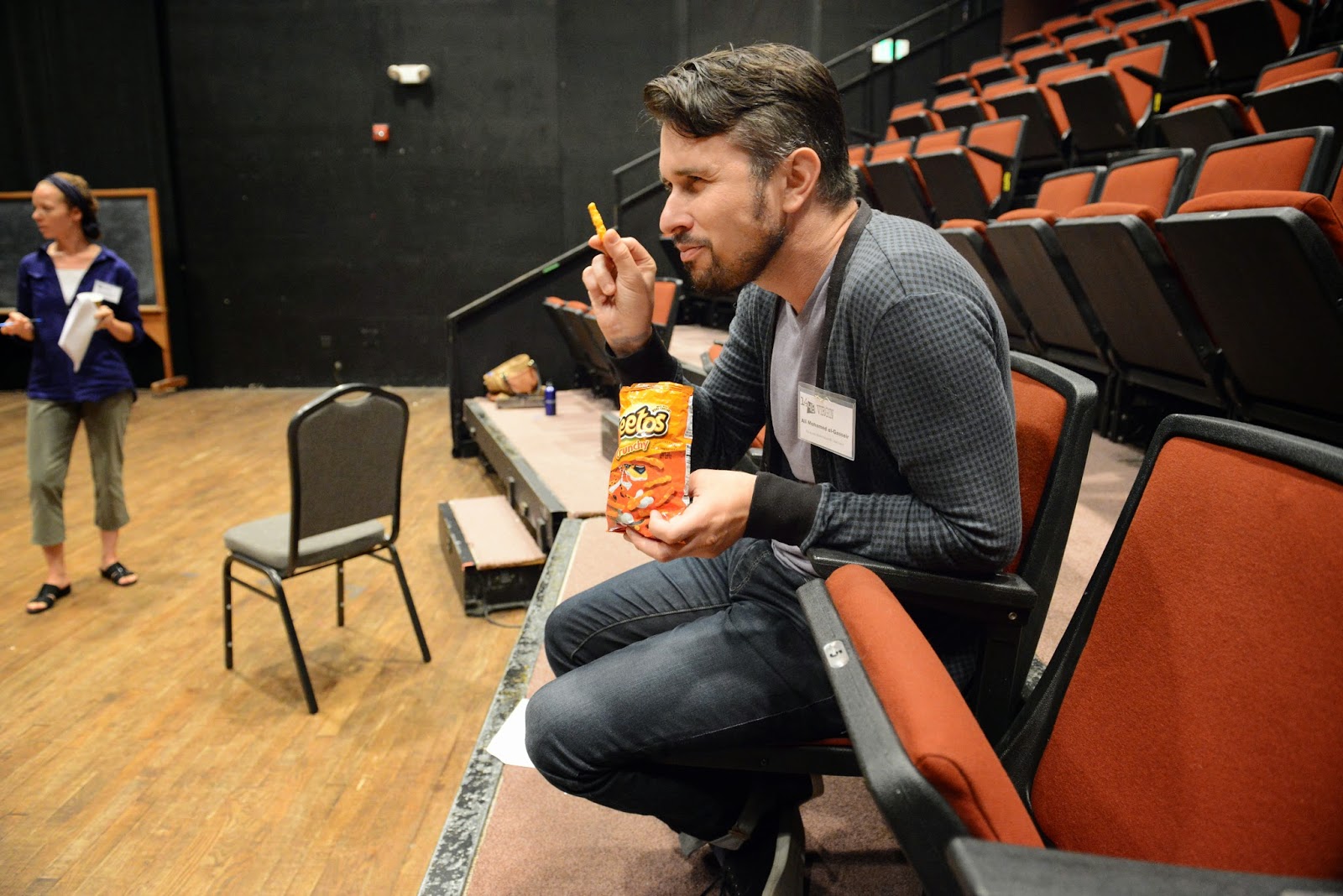 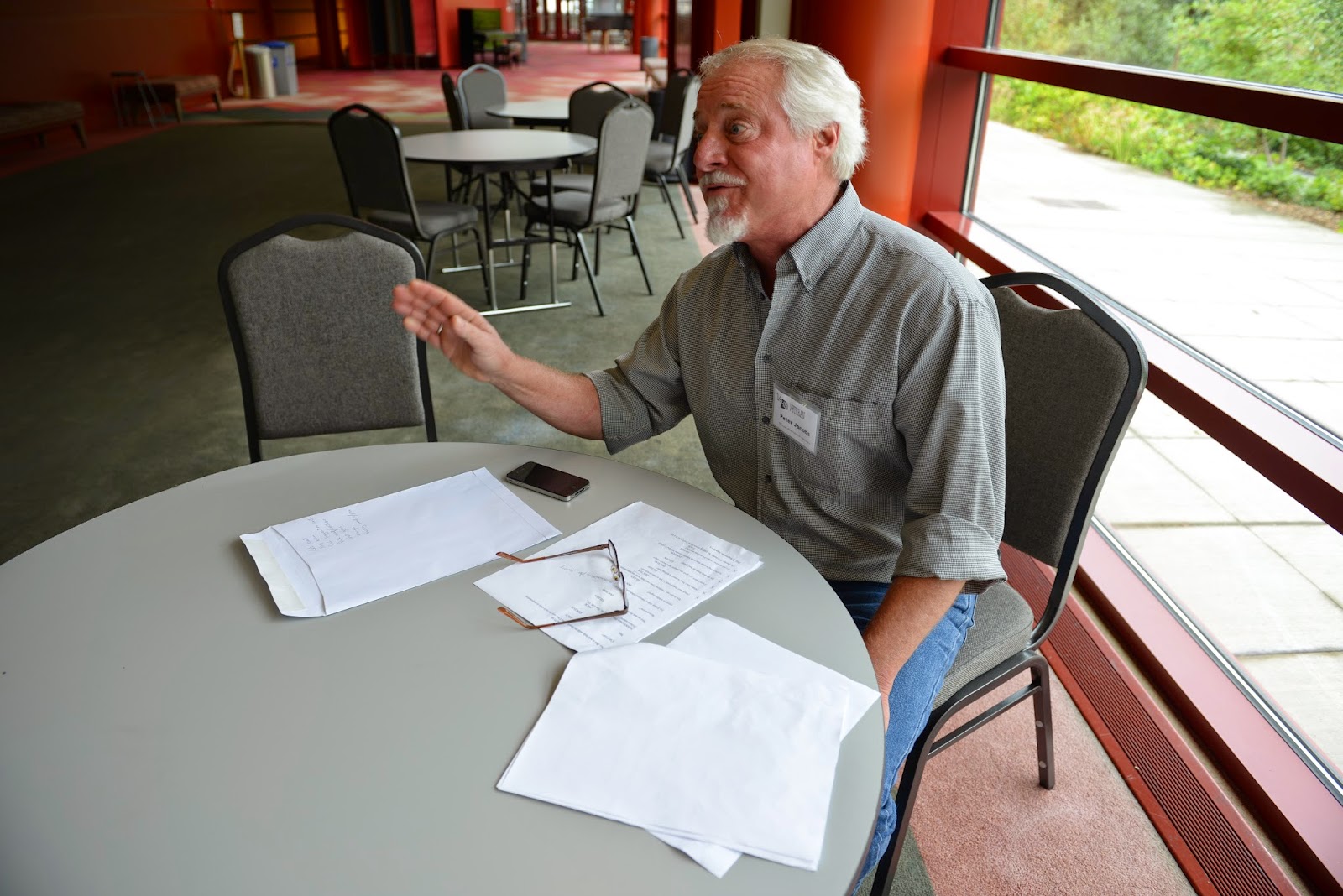 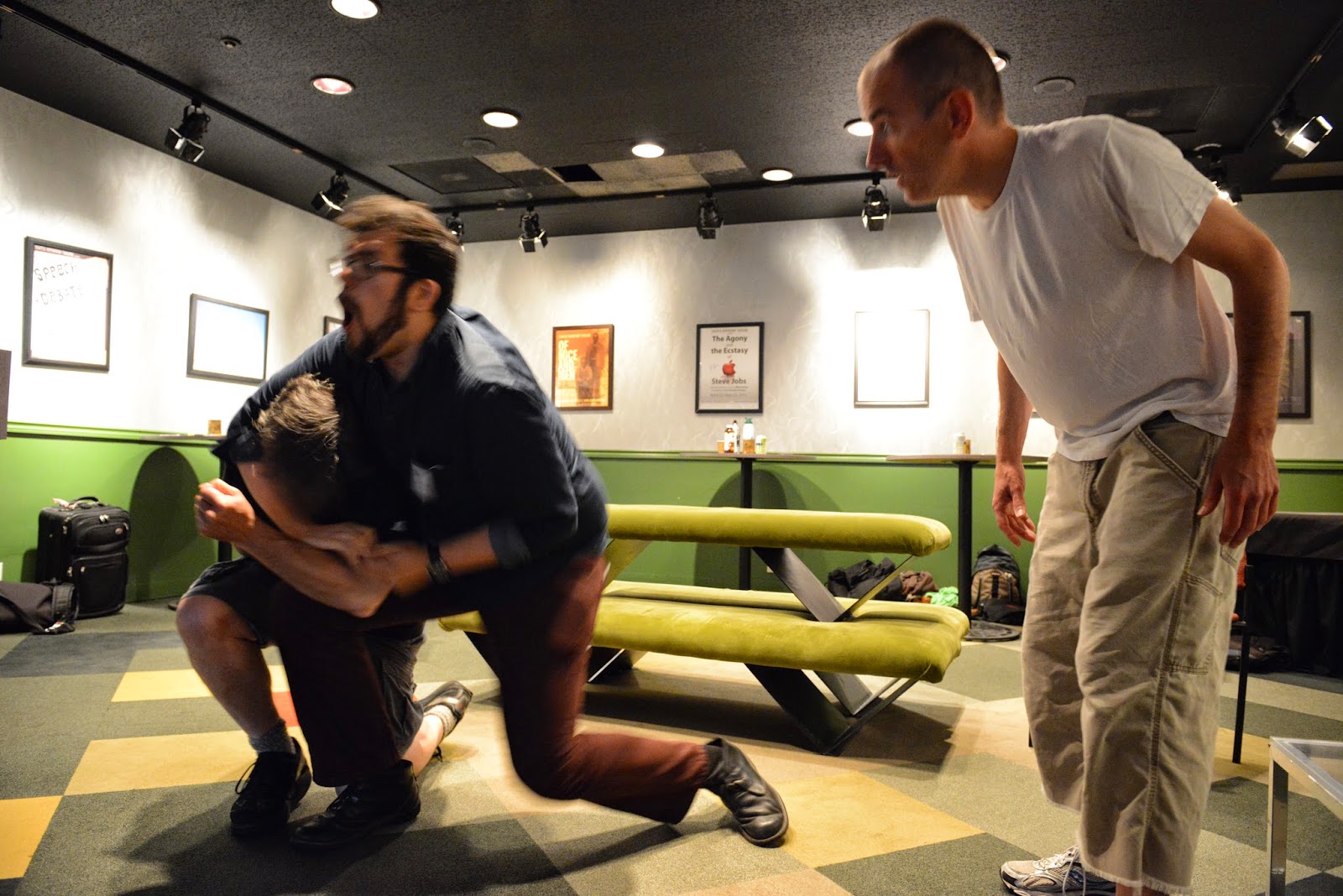 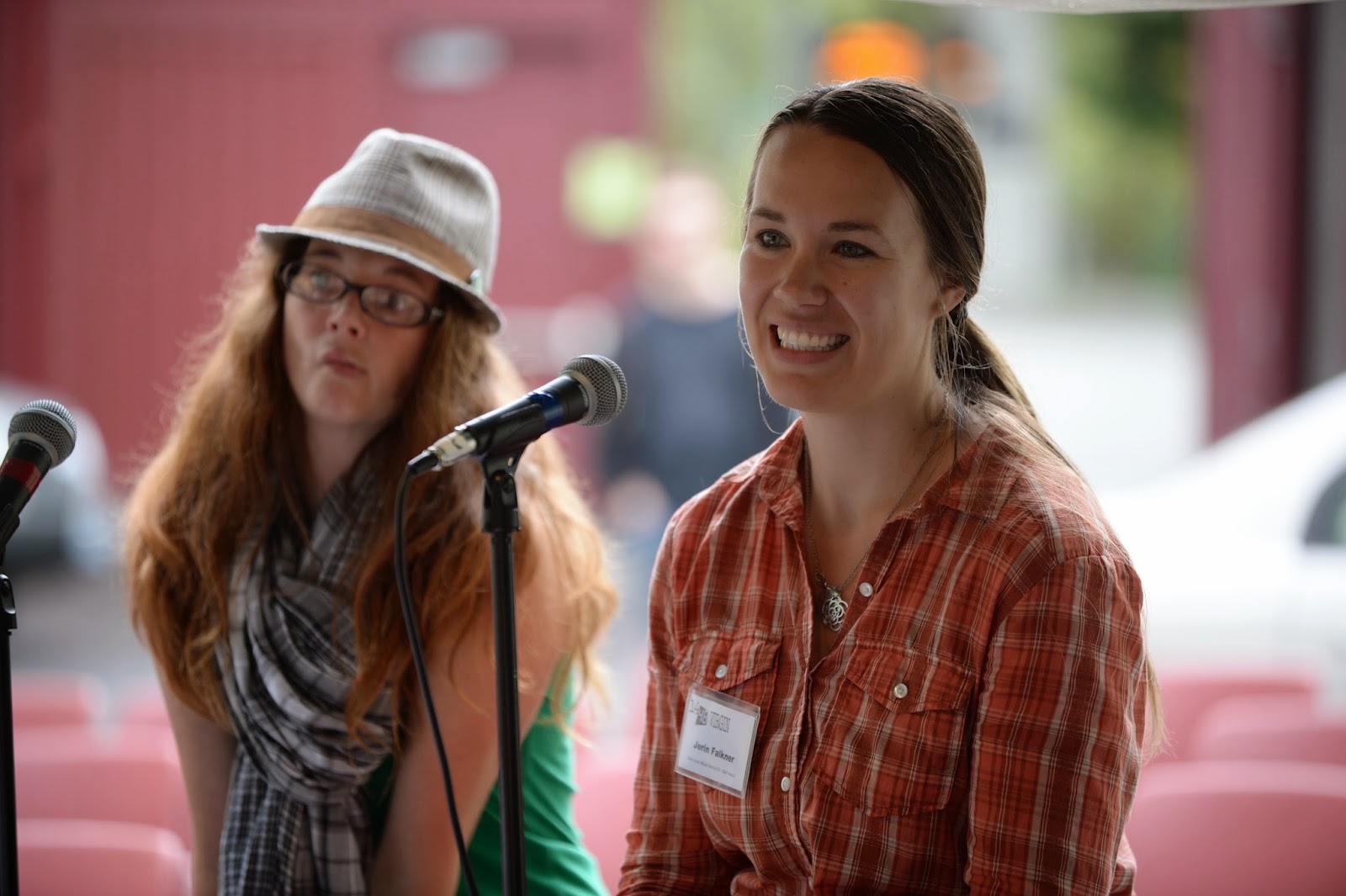 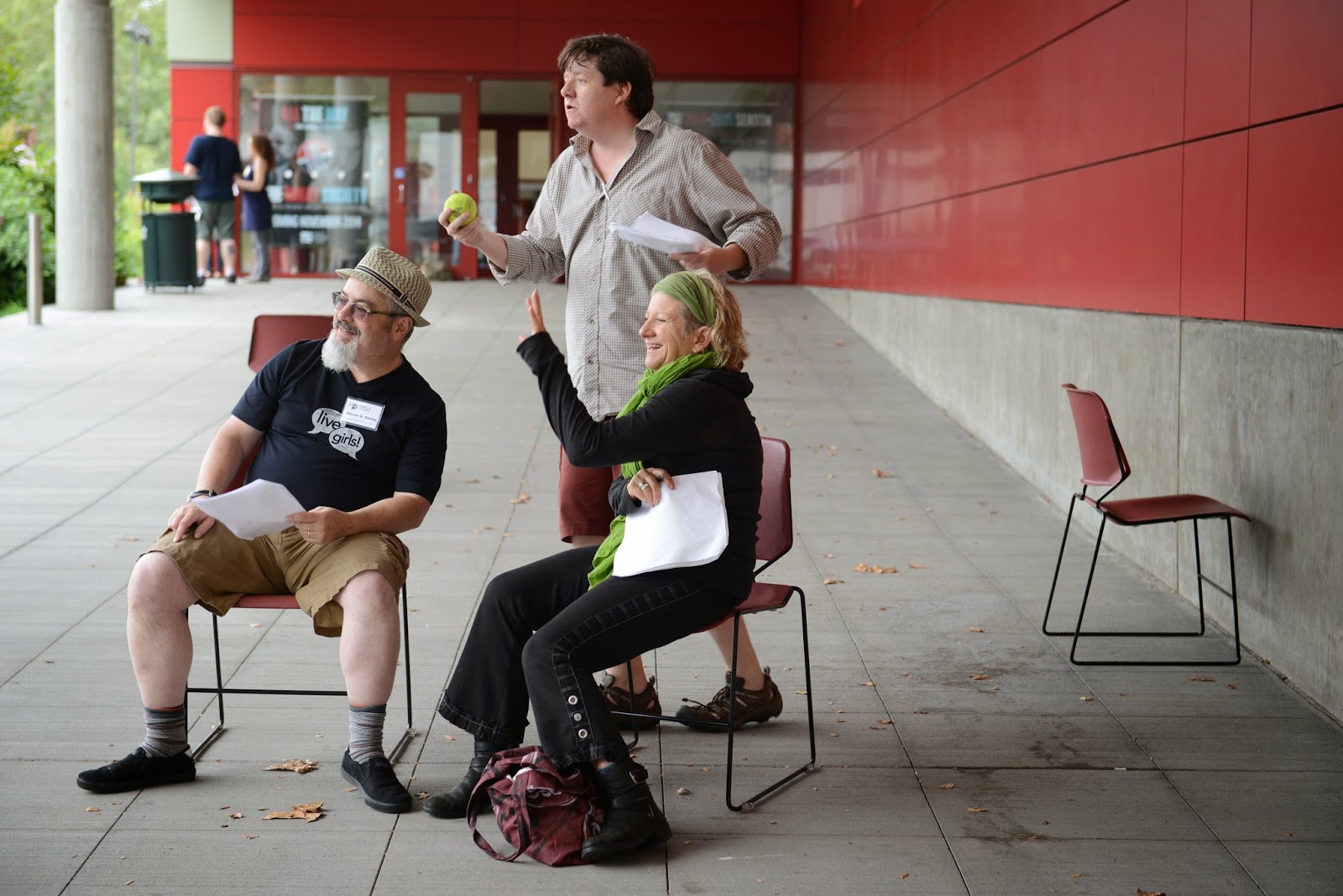 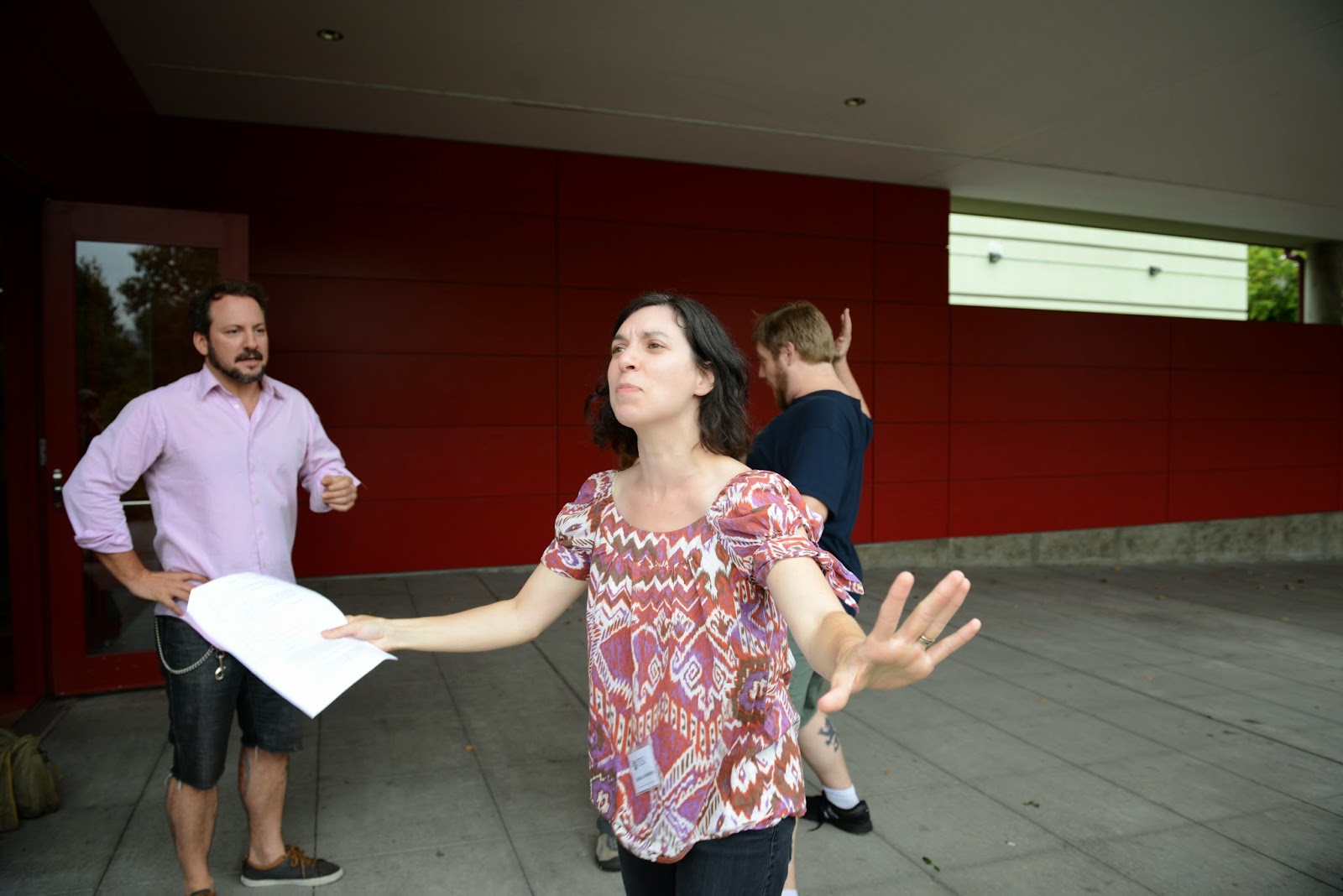 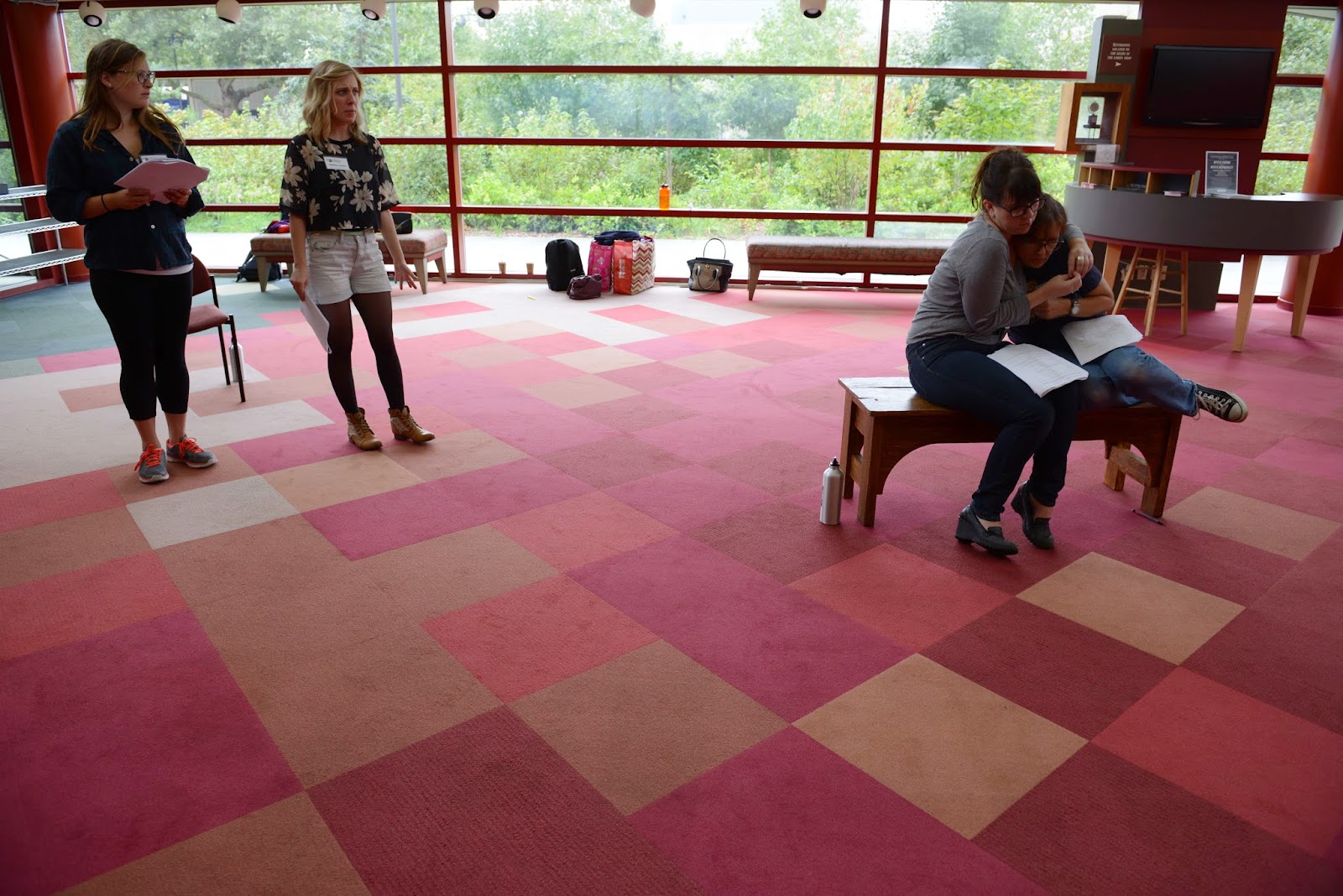 Posted by Kymberlee at 5:36 PM No comments:


Today, we had two junior bloggers, Livvie Jewell and Gigi Varriano, taking photos and interviewing.  Here's an interview they did with veteran actor Jim Jewell:

Q:  What do you think the hardest job would be?
A:  Probably managing the lights and sound.

Q:  What's your favorite thing to do?
A:  Hmmm, that's a tough one.  Running the kitchen, actually.

A couple of photos from the grrls:

Posted by Kymberlee at 5:05 PM No comments:


So far, I've seen/heard these yeses:
The perfect cartwheel.
An irresistible dog.
Some very awkward dancing.
Sweet jams from the 14/48 Band.
Joe Zavadil giving his walrus impression with Red Vines.
John Bradshaw's delicious cookies.
A quorum of  patient, talented people.
A song about a fish that lives in an unexpected place (don't try to guess, just come see for yourself).
A hardworking crew keeping it all together.
"Two pairs of fishnets, iridescent body paint and a pair of sweat pants."
(and a cuddle)


The actors and fed and are rehearsing like crazy in the warm, dry air.  A favorite quote from director,  Jen Moon:


"She really just wants to slap you up side the head."


The band is tight.

You know you want some of this. 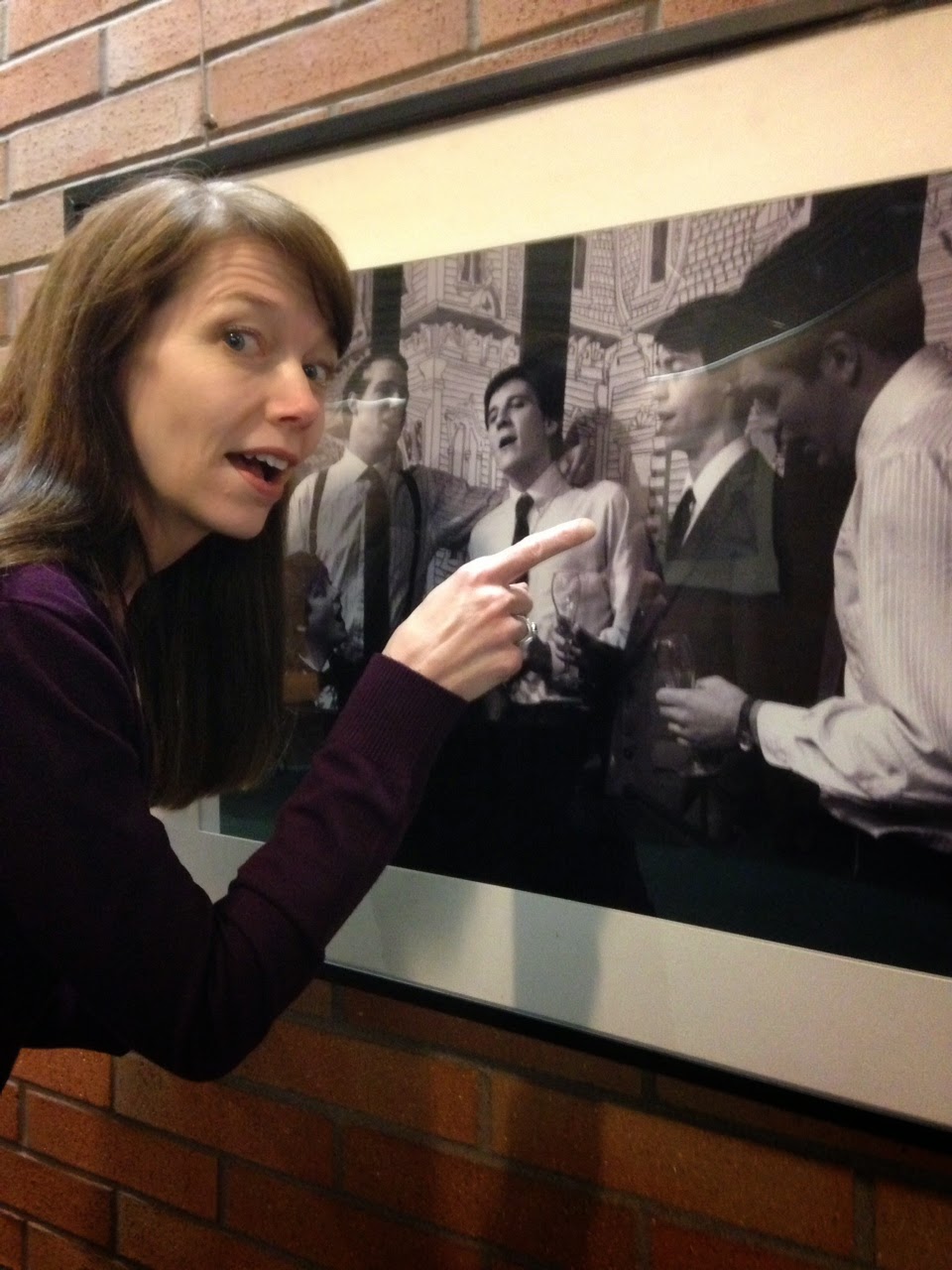 He's not around this weekend but it seems that Shawnmarie Stanton found him.  I'm not gonna say who told me to post this but his initials are JJ.
Posted by Kymberlee at 12:51 PM 2 comments:


Seven plays for the theme "If it ain't broke, don't fix it"  have been written and cast.


But New Thoughts Appear In Our Minds

Candiru Means I Love You
by Scot Auguston

The Tukwila 500
by Bret Fetzer and Juliet Waller Pruzan

Everyone is busy getting ready to wildly entertain you including the clouds which are currently squeezing out their last drops.

Do you have your tickets?

Posted by Kymberlee at 11:26 AM No comments:

The Cone of Destiny